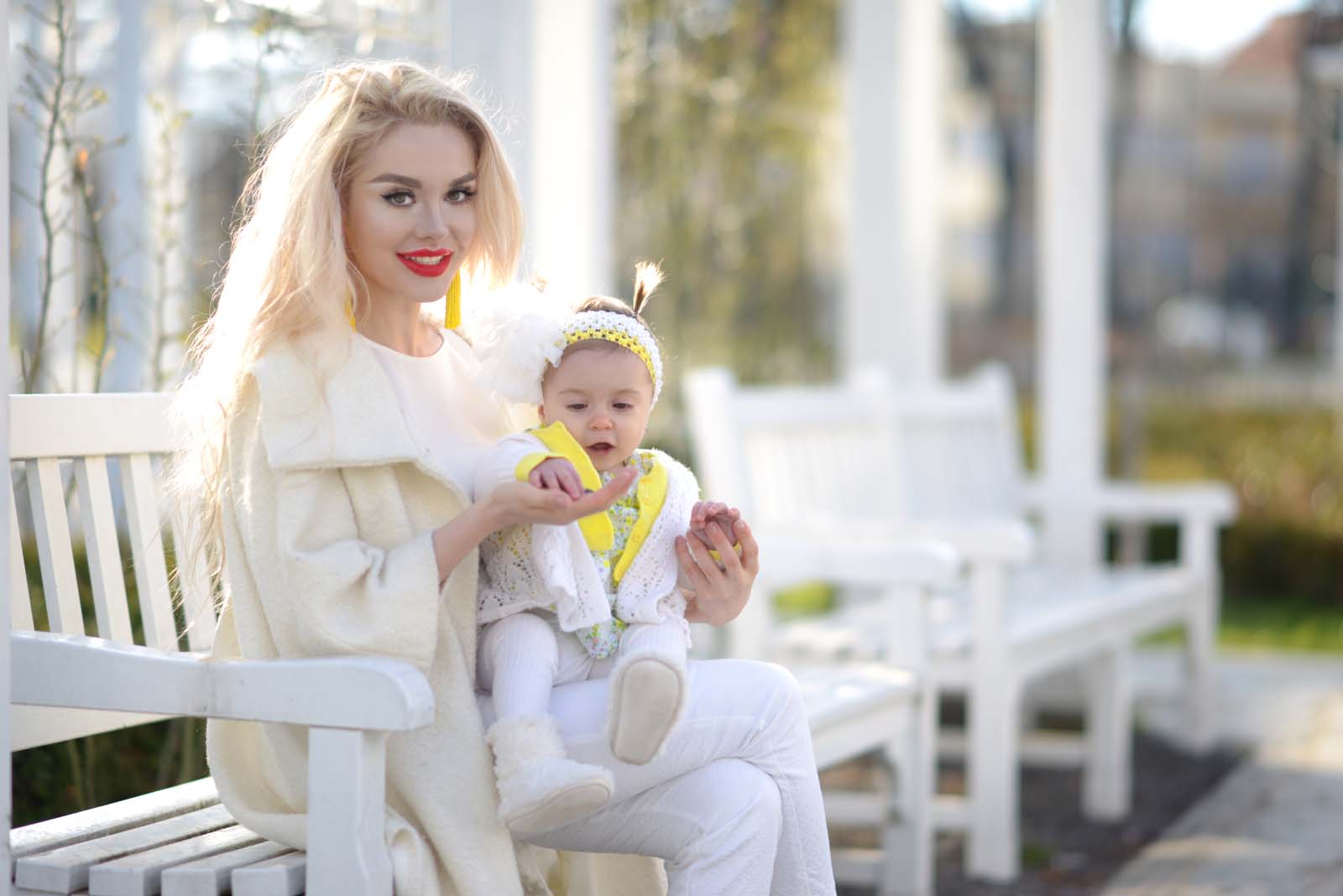 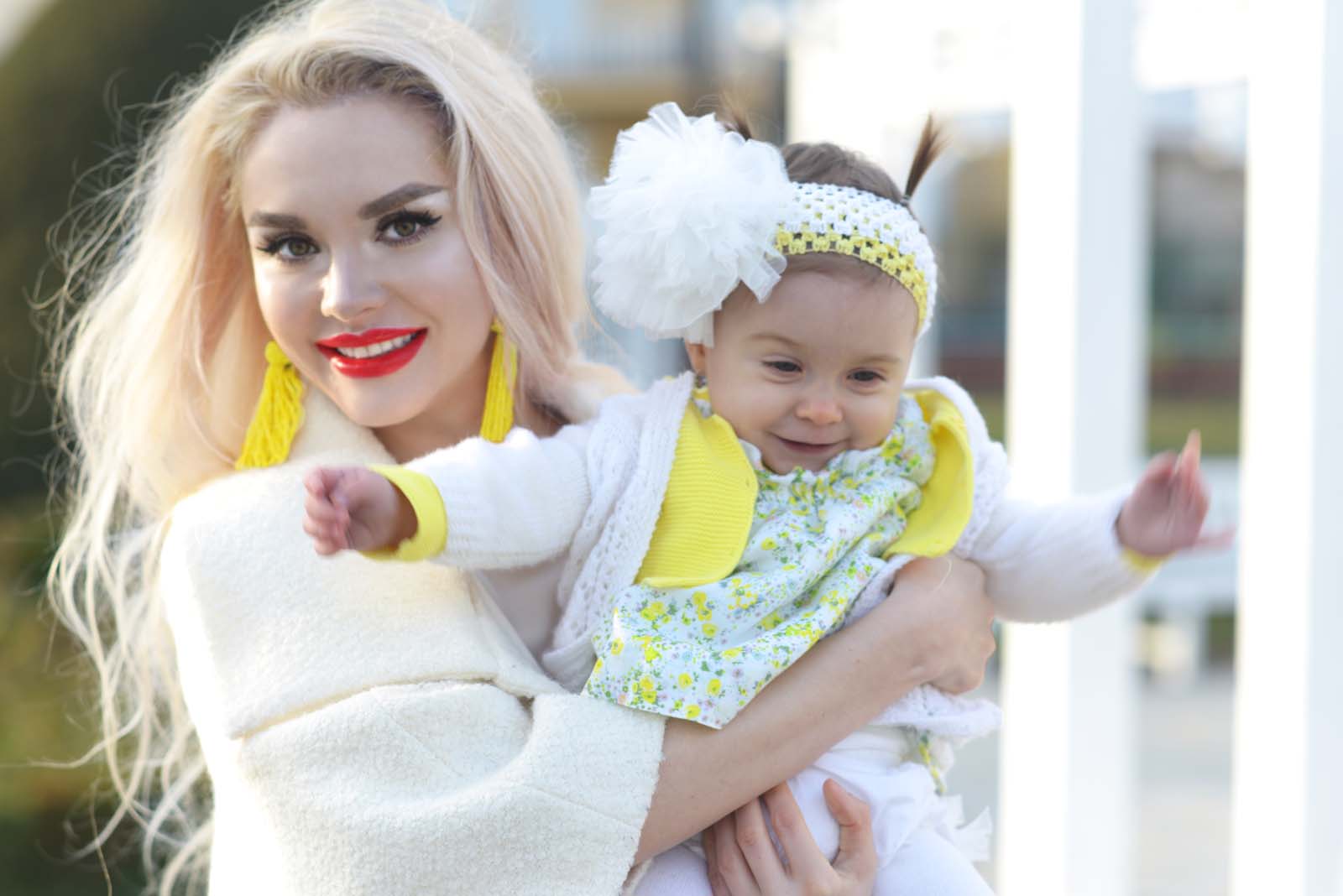 1.Foundation – CC Cream Amore Pacific, 104 Tan Blush(find it in Sephora stores in US)
2. Concealer – MAC Pro Longwear, NW 15 applied with Beauty Blender
3. Primed & poreless priming powder
4. Eyebrow conturing powder HIGH BROWN – I used it for conturing the nose and face. Being low colour saturated it’s good for this purpose.
5 , 12. Eyeshadow used as highlighter from Yves Rocher in Amande vanille shade. It’s old and probably discontinued, but it’s a simple white frosty eyeshadow, very good for highlighting, which I used on my cheeks, top of the nose, middle forehead and chin, under the eyebrows, in the inner corner of my eyes and on cupid’s bow. On cupid’s bow and under the eyebrow I’ve applied the highlighter with the 214 Short Shader Brush from MAC which is very good for this purpose.
6. DIPBROW POMADE in TAUPE from Anastasia Beverly Hills applied with an angled brush. SEPHORA COLLECTION Long-Lasting 12HR Wear Eye Liner in Dark brown, used for eyebrow texturing. And finishing with a hair gel applied with a brow brush.
7. Boudoire Eyes Shadow Palette from Too Faced: In the Buff for right under the eyebrows for a good contrast with the 214 Short Shader Brush from MAC which is one of my favourite brushes and I consider purchasing another one since I often need two of these when doing my makeup. I’ve applied this eyeshadow on the eyelid as a base as well.
8. Eyeshadow on crease on outer V corner – Too Faced Chocolate Bar in Triple Fudge. I applied it very lightly just to achieve a very light depth colour on the crease.
9. Eyelashes – Ardell 113 glued with Ardell adhesive
10. Waterproof Liquid Eyeliner 24/7 in Black from Urban Decay
11. Mascara Coloured from Avon
13. Oriflame red lipstick – old and probably discontinued, which I’ve applied with the 208 Angled brush from MAC to get a very good contour, which together with 214 Short Shader Brush from MAC it’s my favourite and most used brush.

I wanted to wear these cute yellow earrings for the first day of Spring. I’ve seen them some time ago on Nasty Gal, but I thought they were a little too expensive, just to find them later in H&M for a couple of $. I had two outfits in mind, one of them was with an indigo shade of blue shirt and a 2 shades of blue eyeliners and the second was with simple clean, well refined cat eye and red lipstick. I choose the first one at first, but I realised I didn’t have those shades of blue that this makeup required, so I went for the second option. But I definitely want to wear them with that makeup, as well someday, because it will look very good together. I already had some bold colours on the face area so I choose a clean all white look, something that would make my face stand.

I would like to insist a little more on my makeup, because there are some things I’d like to highlight. First even though it’s a very simple makeup, anyone would agree, it actually took me a lot to make it, just as most of my makeup do, because I pay much attention to the details. You’d probably think it doesn’t really matter, but it actually does, especially when you make something very simple, you want it too look perfect: starting from perfectly and naturally shaped eyebrows, to a very good highlighting and contouring of the face and nose, as well as of the lips.

It’s really not easy to explain a makeup in words, for this reason I’m thinking more and more for making videos while I’m doing my makeup, as well as how I choose my outfit – a complete look, but of course this requires extra time, which at the moment I barely have for these posts. But I think this will be solved in the future.

What I’d like to mention about the makeup is that I’ve worked a lot on the eyebrows, which I most of the times like to make them perfectly looking, as I think they are very important, like a frame for the eyes. What I think it’s very important is to achieve a good contrast between the eyebrows and the skin, without making them look fake. For this it’s important to have a sharp line on the bottom part and a good light(but not white), natural contrasting colour right underneath them. I used In the Buff shade from Boudoir Eyes Palette from Too Faced for this, as it’s a light natural, beige colour. As I said , I would usually not use a very white colour since it would look unnatural, only if you’d make it on purpose, like you really need a white in there to complete the makeup you had in mind.

The second thing is contouring and highlighting, which I more or less agree with it. I think it has a drastic effect on the nose, but I’m not sure I like it all that much for the face. I mean contouring definitely can look great in photography, but in reality if you go off the board with it, it looks…dirty! For this reason I usually use it only for the nose part. Highlighting too much on certain areas, like in the inner corner of the eyes can also look strange, but it also depends on your features, not every technique works on any face. For this reason you have to “know” your face very well.

For this makeup, and not only, I would choose as a third important aspect: the lips contouring. I like to use an angled brush for lips contouring when I don’t have the corresponding liner of the lipstick I’m wearing. The contour of the lips has to be very precise in order to look good and you can’t usually make it just using the lipstick. The least you can do is to use a liner that has your natural shade of your lips. My lips have naturally good, even and symmetric and sharp contours, so I only need to follow my natural lips contours. But lips contouring can also overcome some of the issues like asymmetry, or a simple lack of natural contour. Plus you can also cheat a little on the size of the lips…What I never like about contouring is when it is obvious. I always use the same colour as the lipstick or if I leave them natural and my liner doesn’t 100% match(as it’s usually the case) I gradually blend it from the contour to the middle of my lips. Also highlighting on cupid’s bow looks very good and gives a little volume boost to the lips.

After choosing my outfit, I looked for Julieta’s outfit as well. I don’t always have something to match with my outfit for her, but when I purchase something for her I try to buy neutral shades. I also don’t like outfits for kids that have too many patterns, colours, drawings and writings..even if people usually dress the little ones like that..This time it happened that I had this cute dress with yellow and green flowers with a yellow cardigan. I’ve added an extra layer, with a white cardigan, plus a DIY ruffled butt and pom pons for a cuteness overload effect!

We had a wonderful day out and we also received some cute silver “martisoare”(lol this sounds so strange, but there isn’t a translation for this, as it’s a Romanian custom to celebrate Spring arrival) from Radu. Juli had a small butterfly and I had a chimney sweep. Even though she can’t wear it because of choking risk, Radu thought this would be a beautiful memory for her. 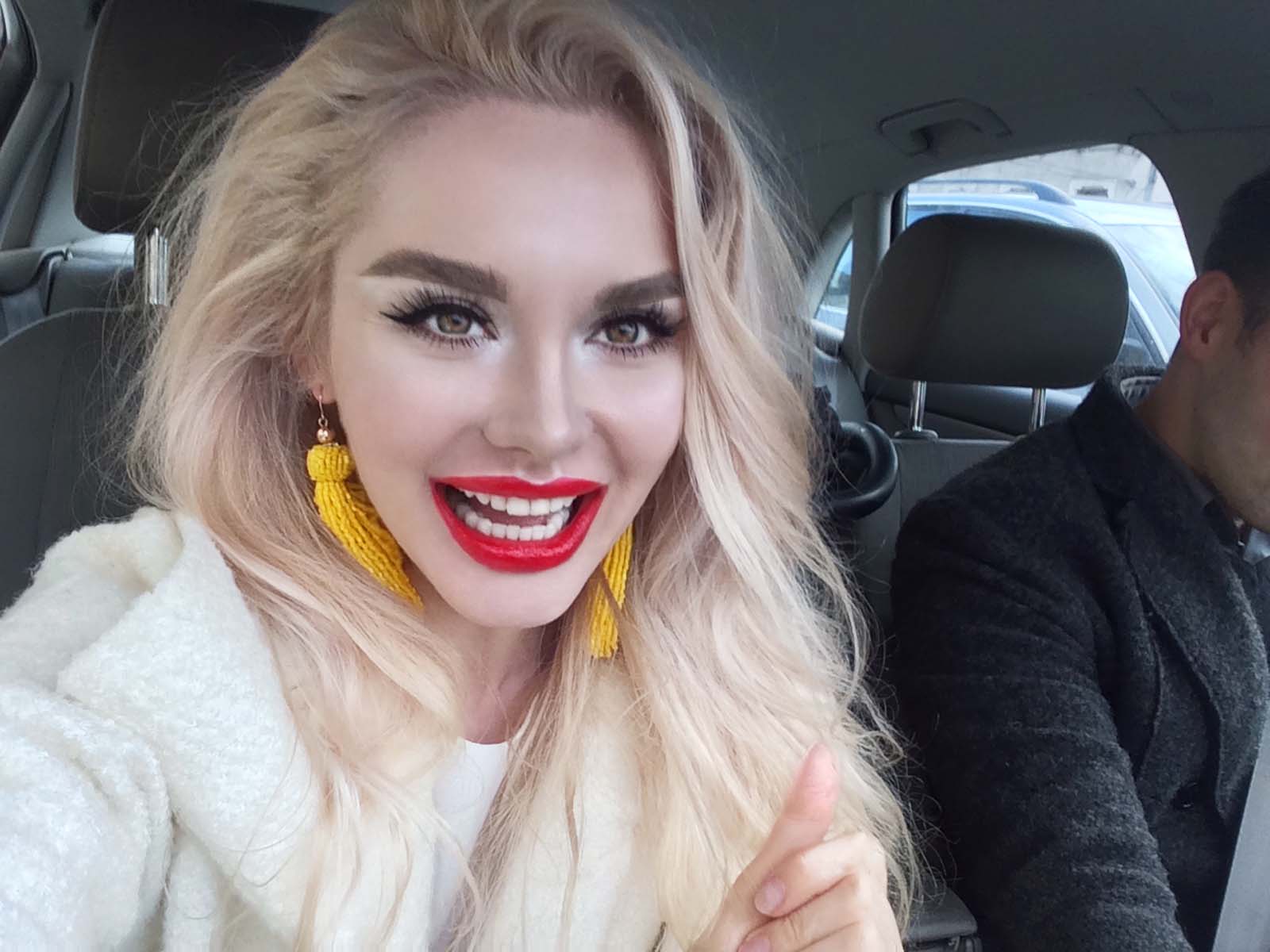 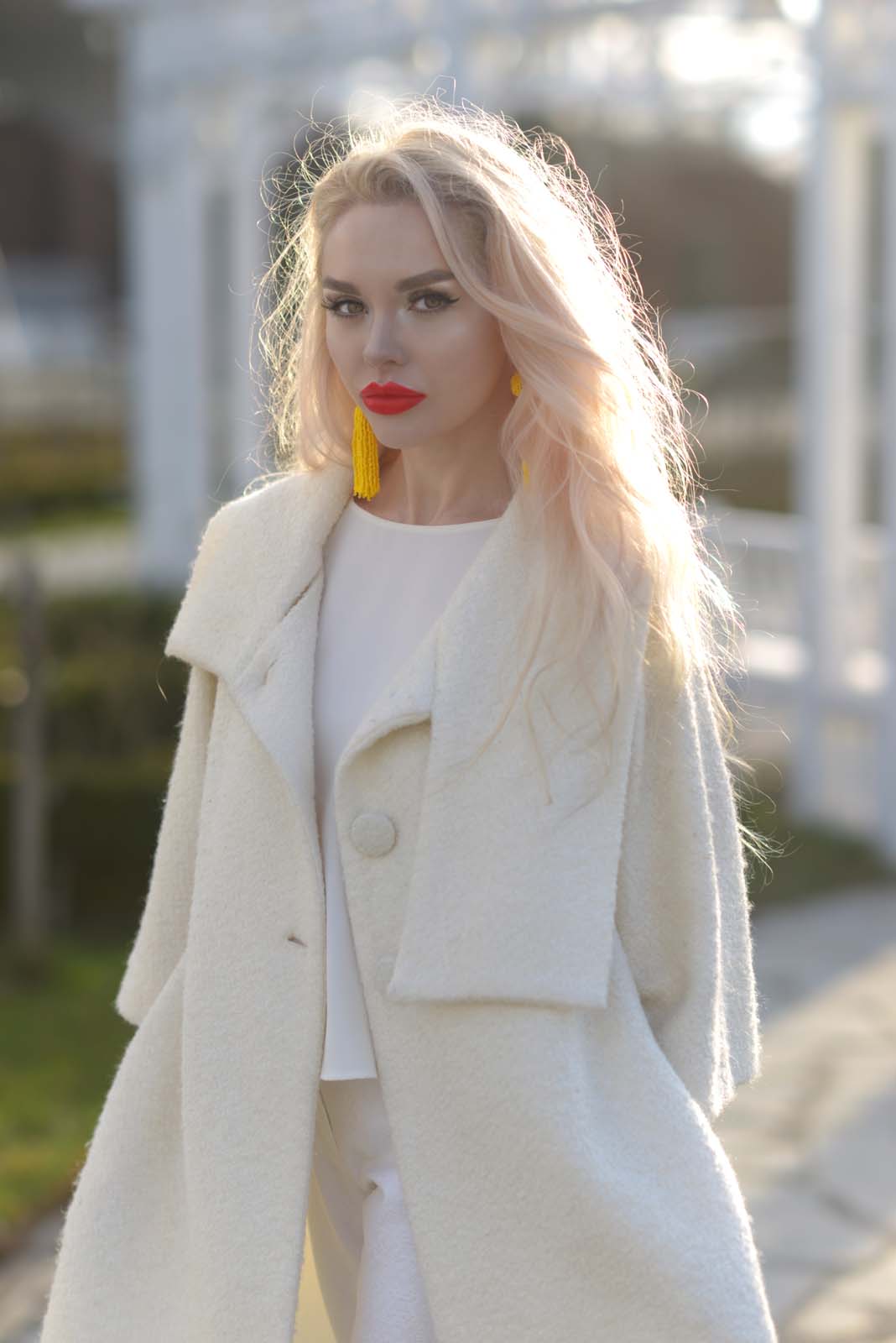 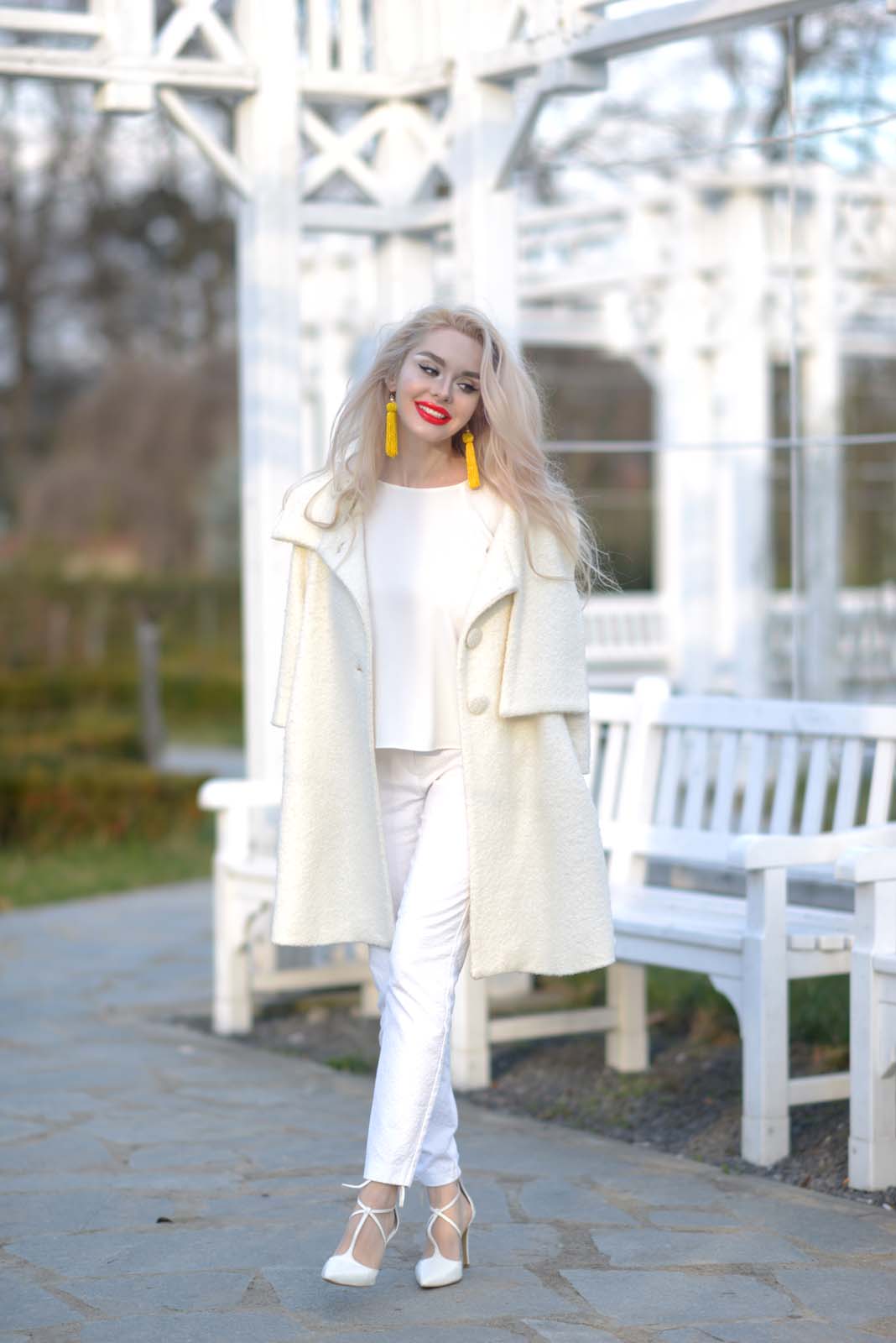 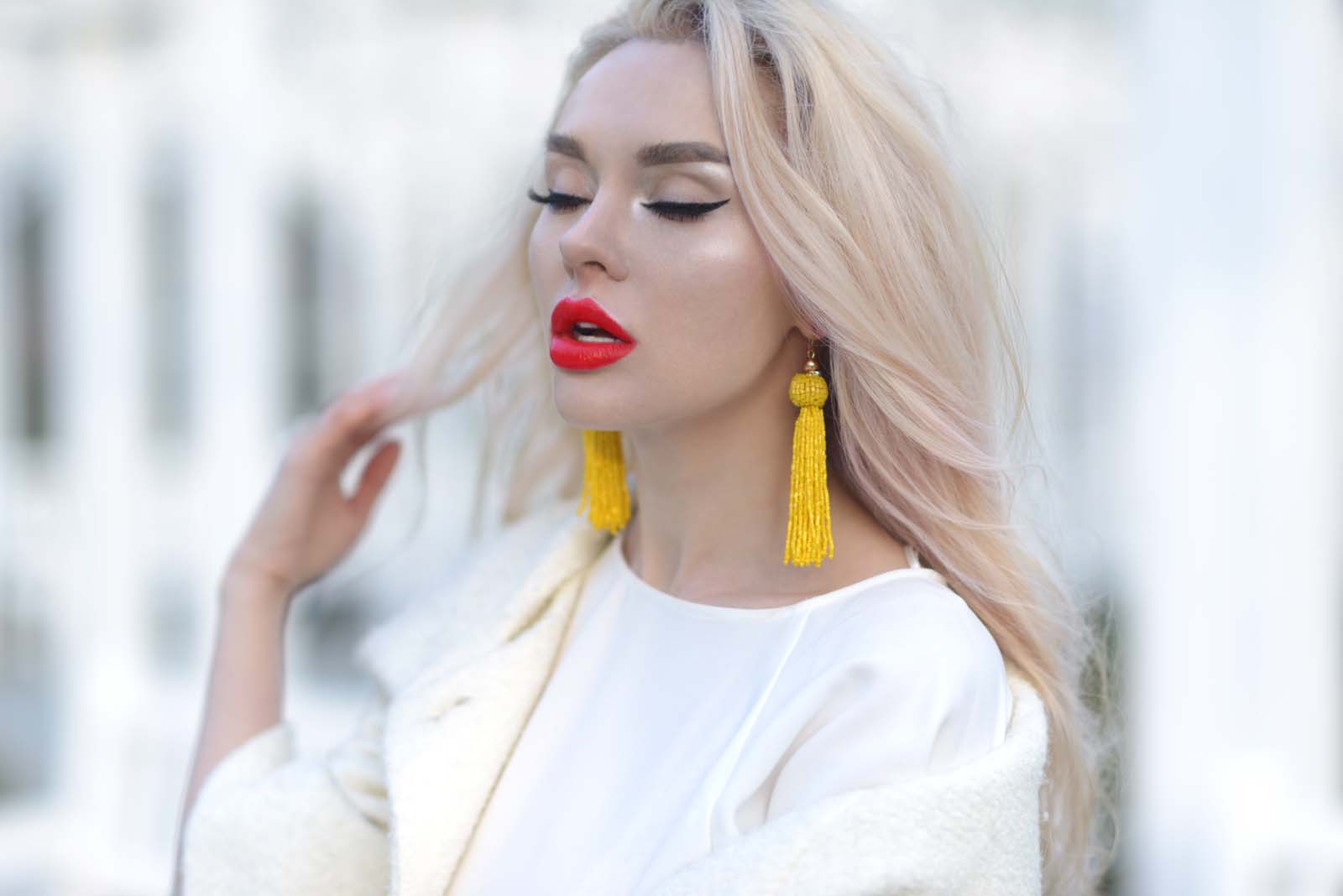 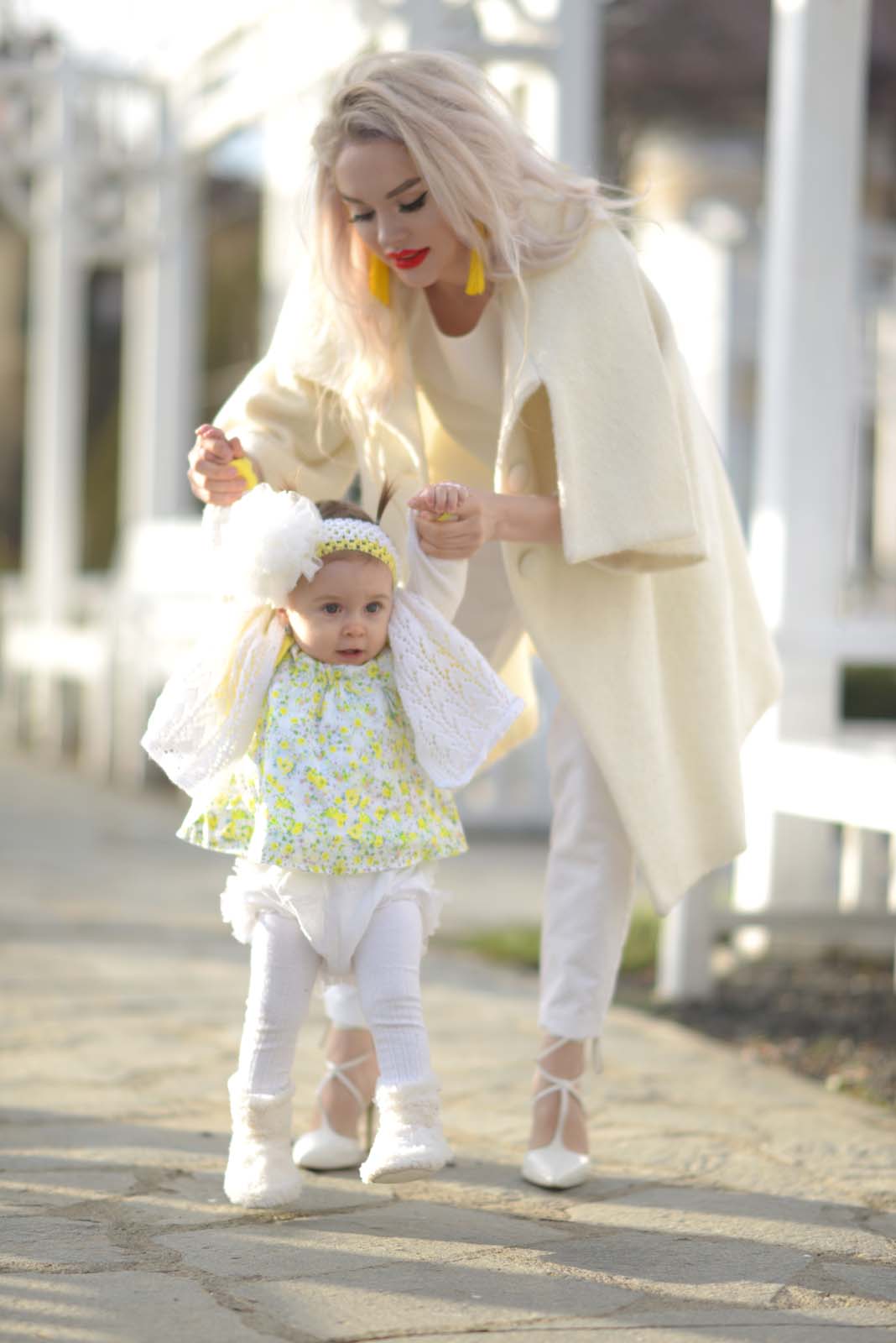 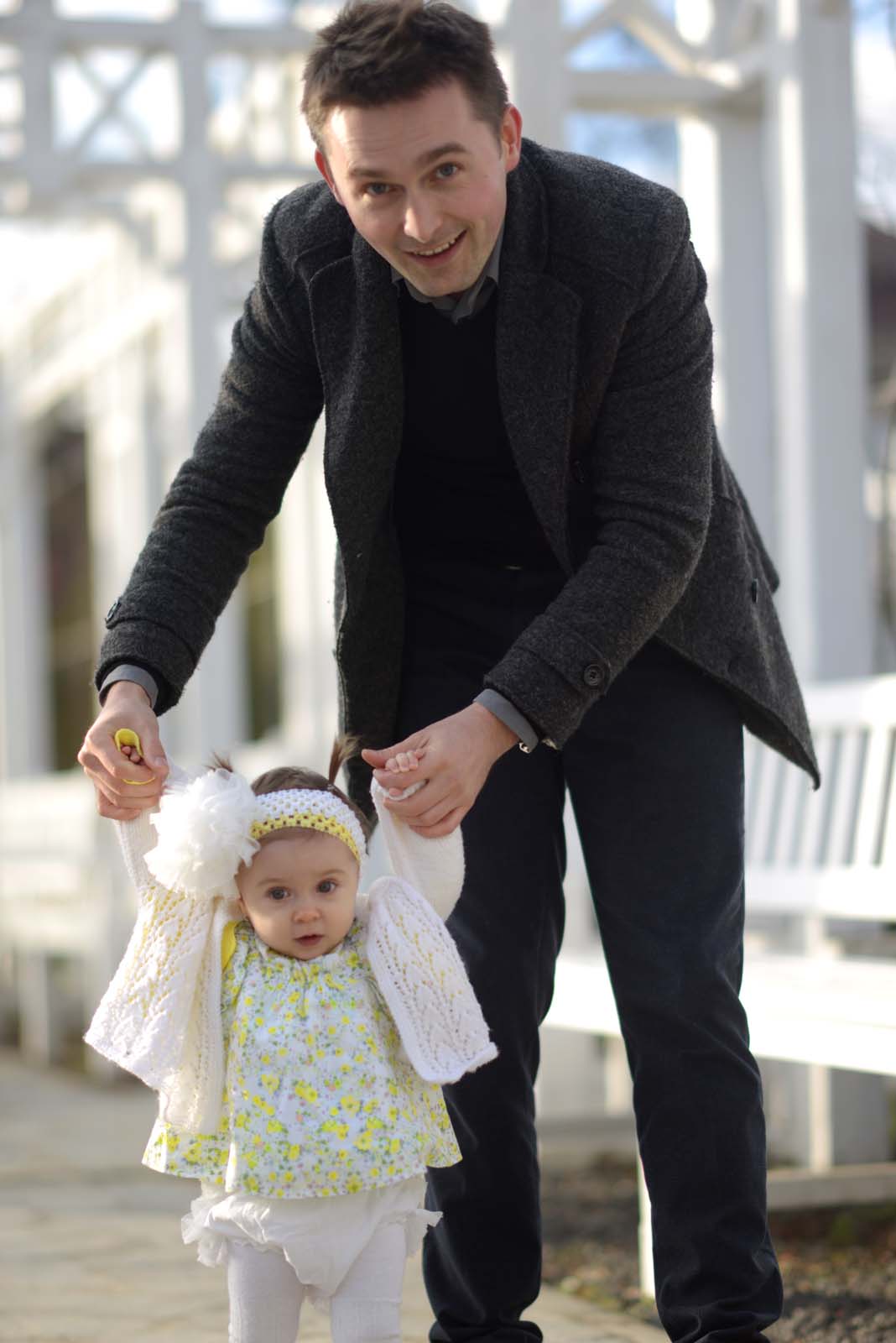 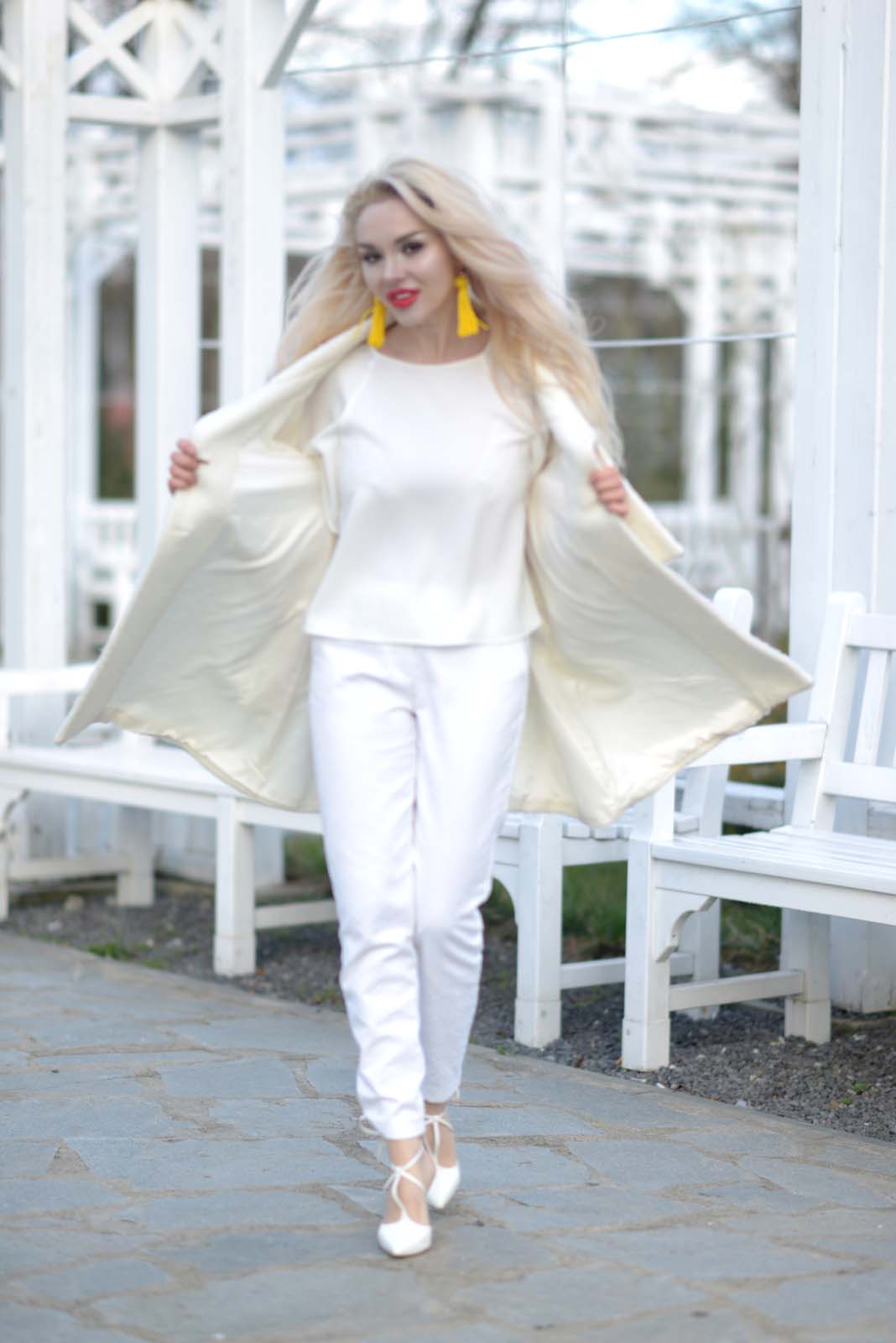 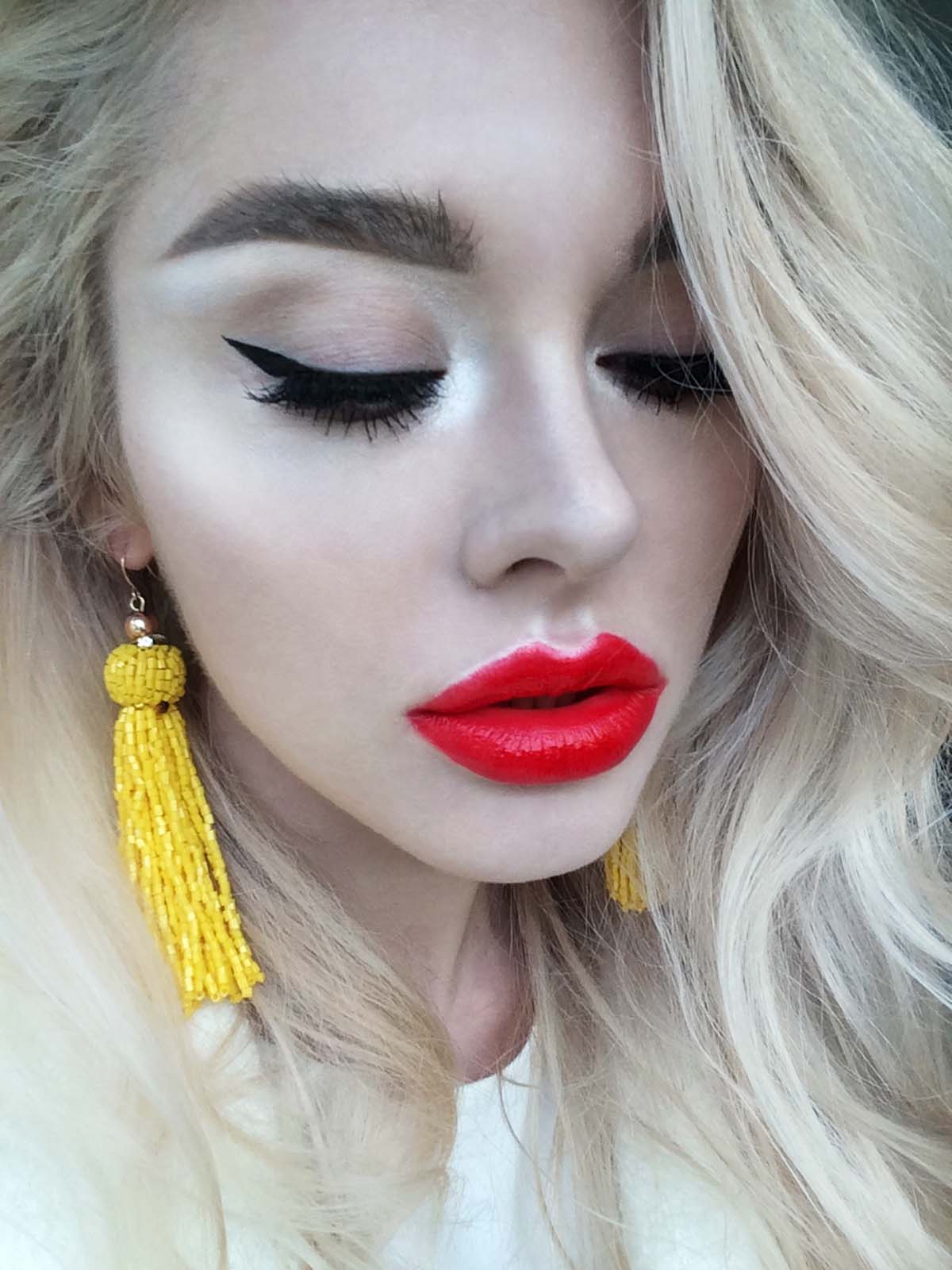 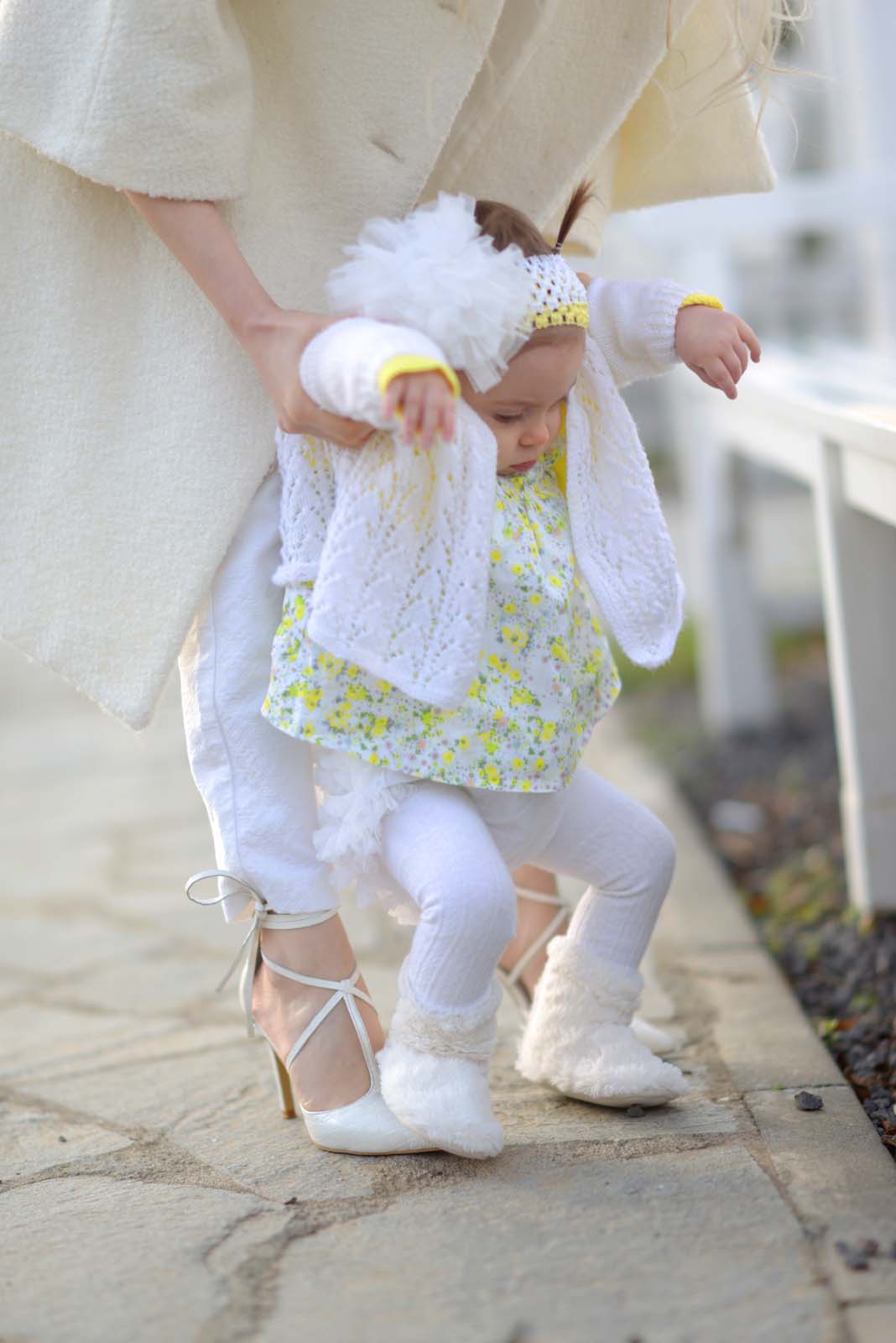 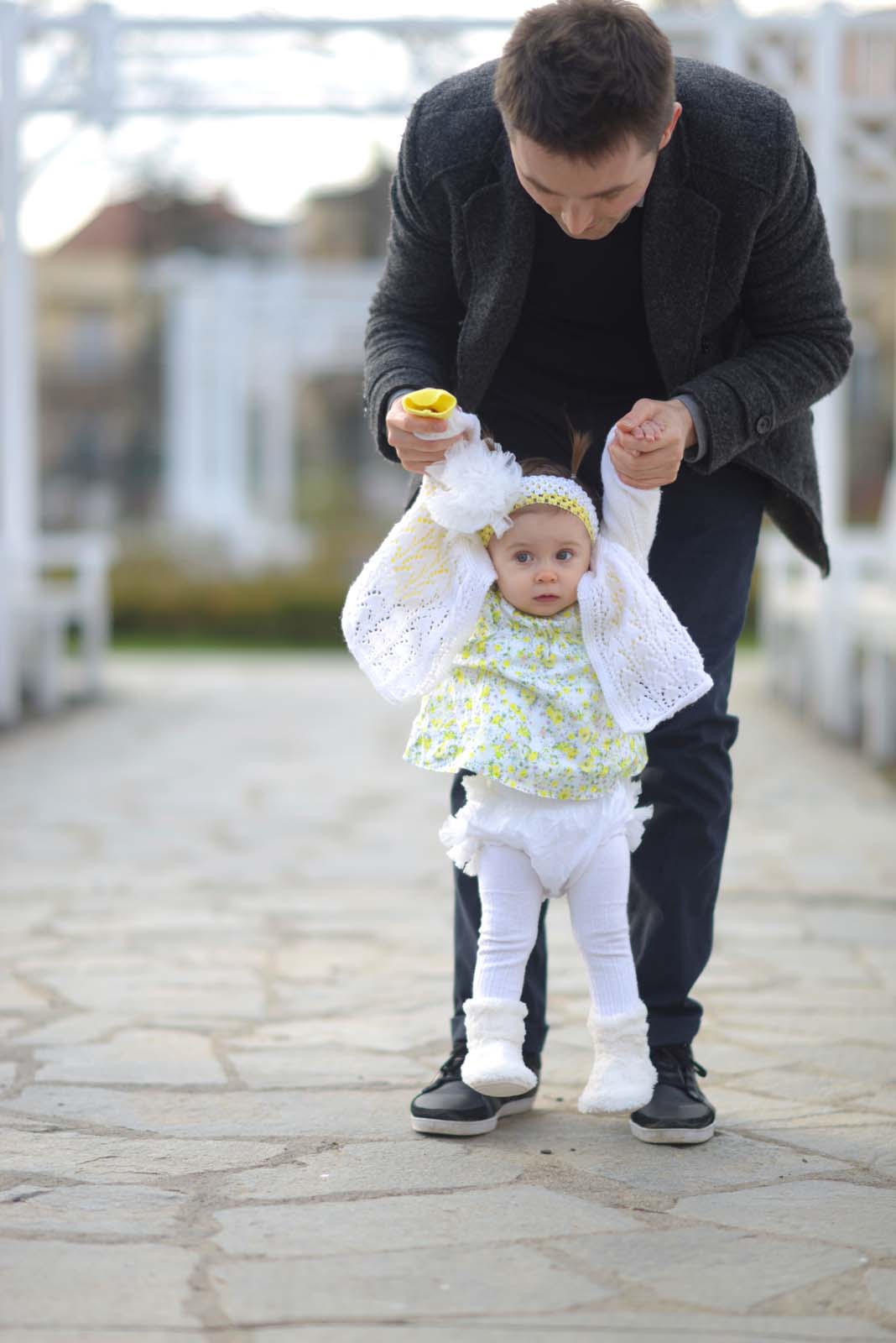 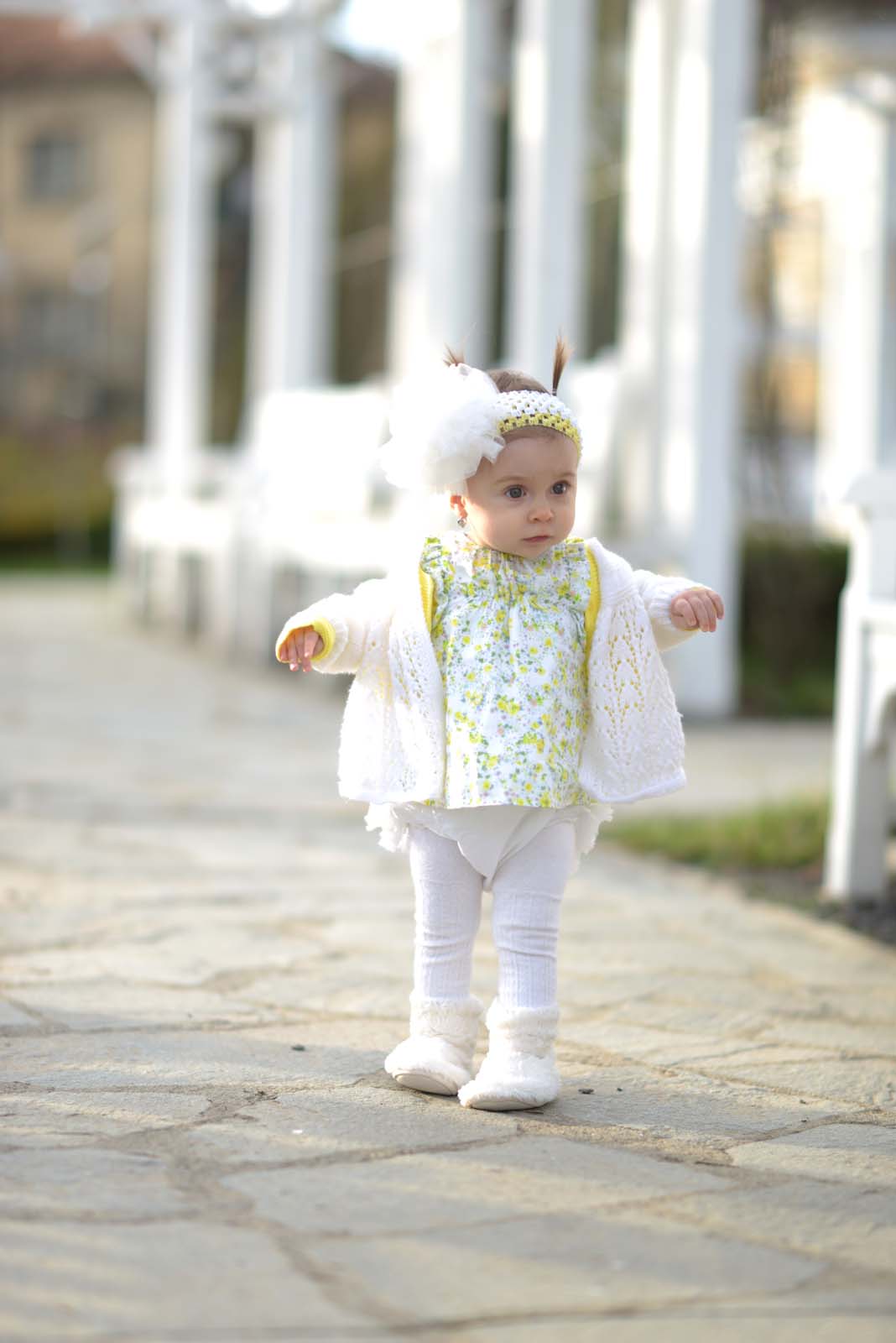 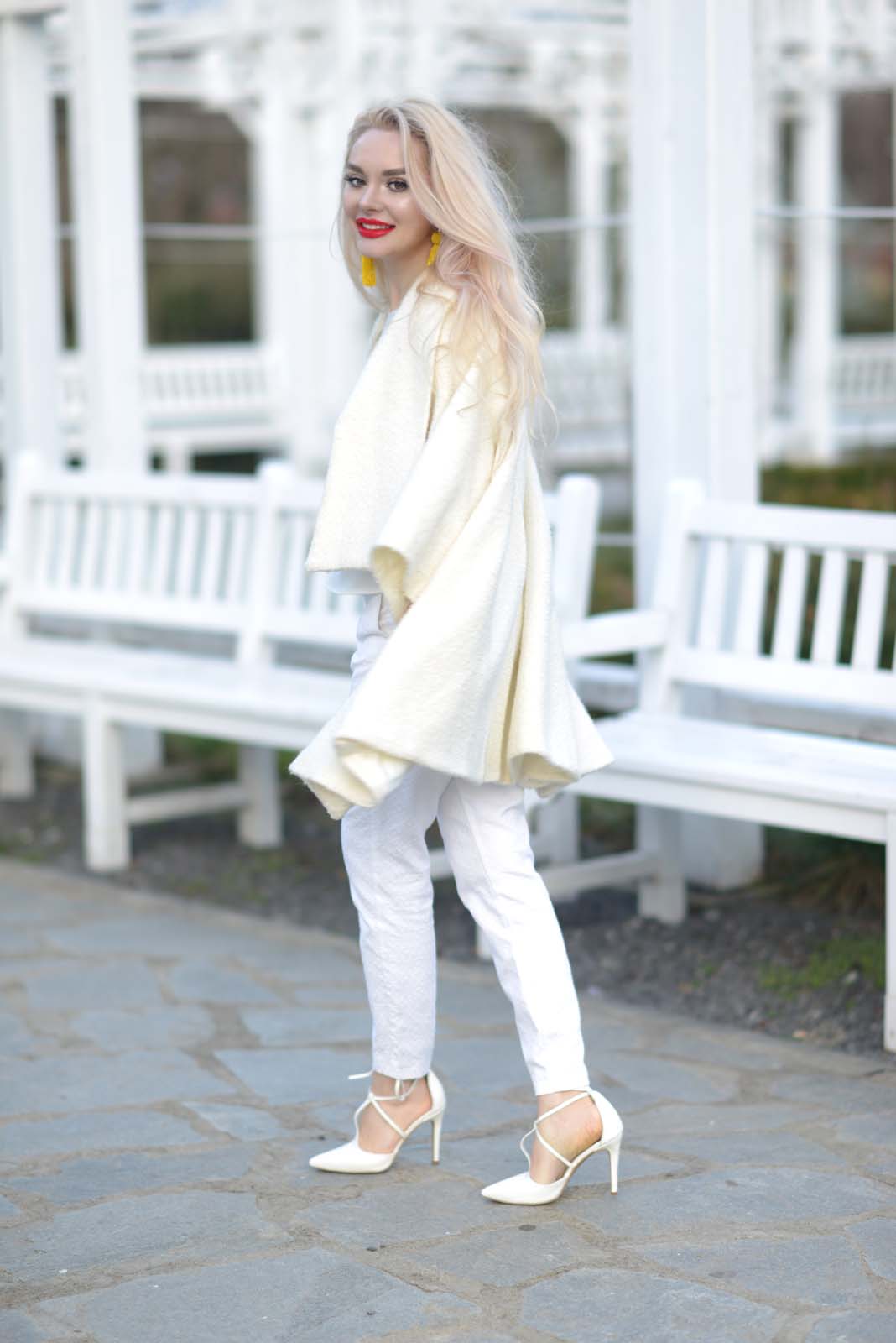 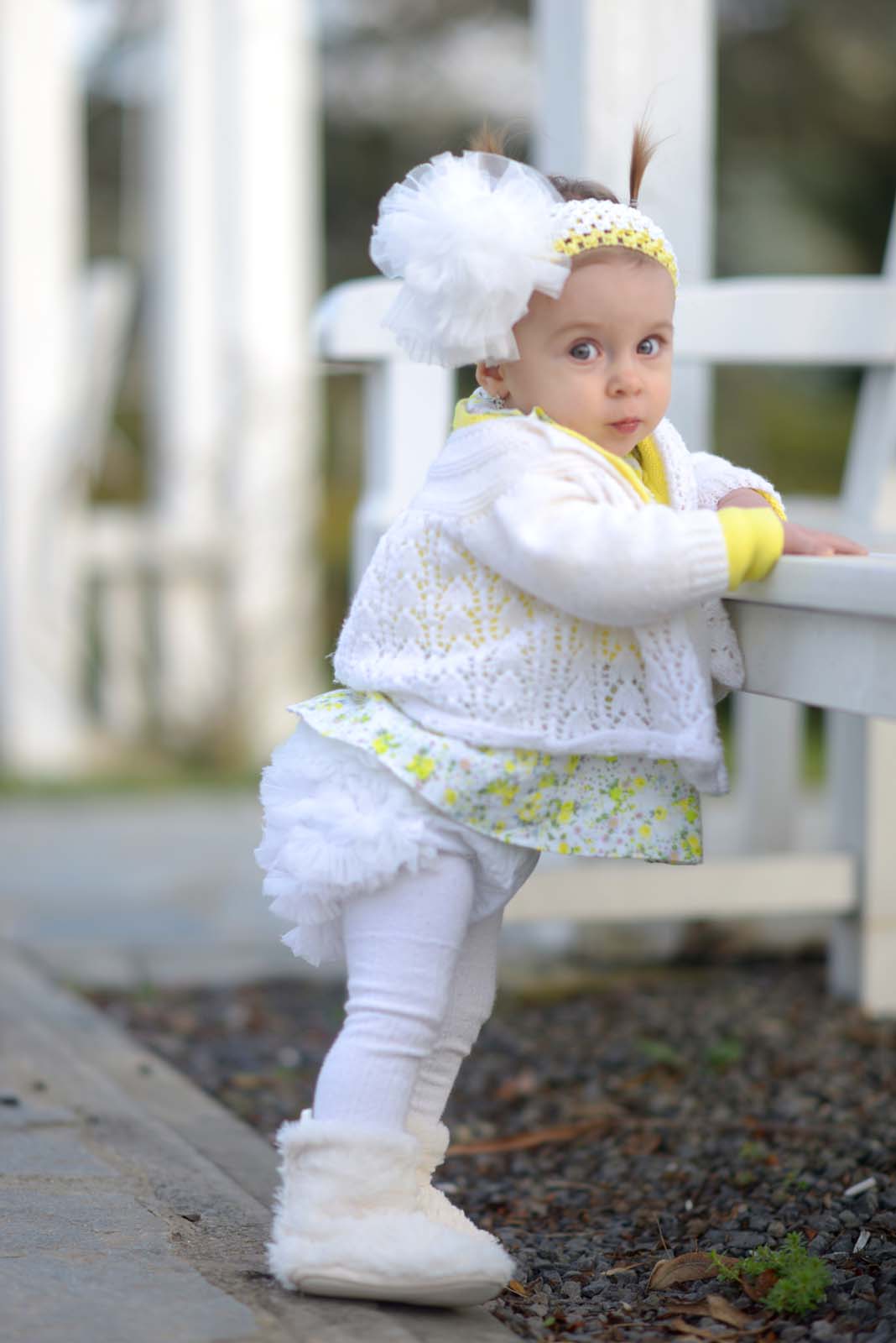 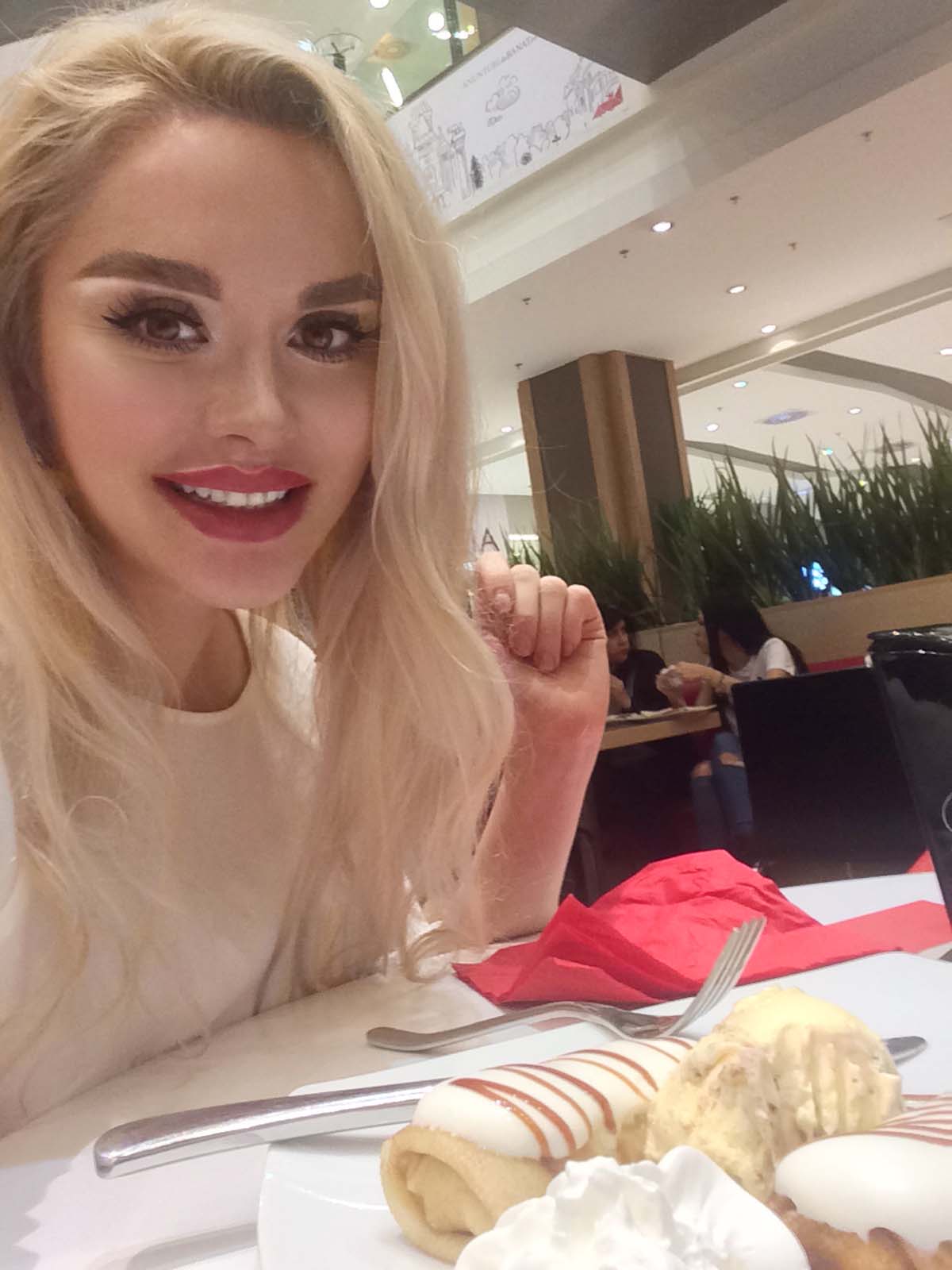 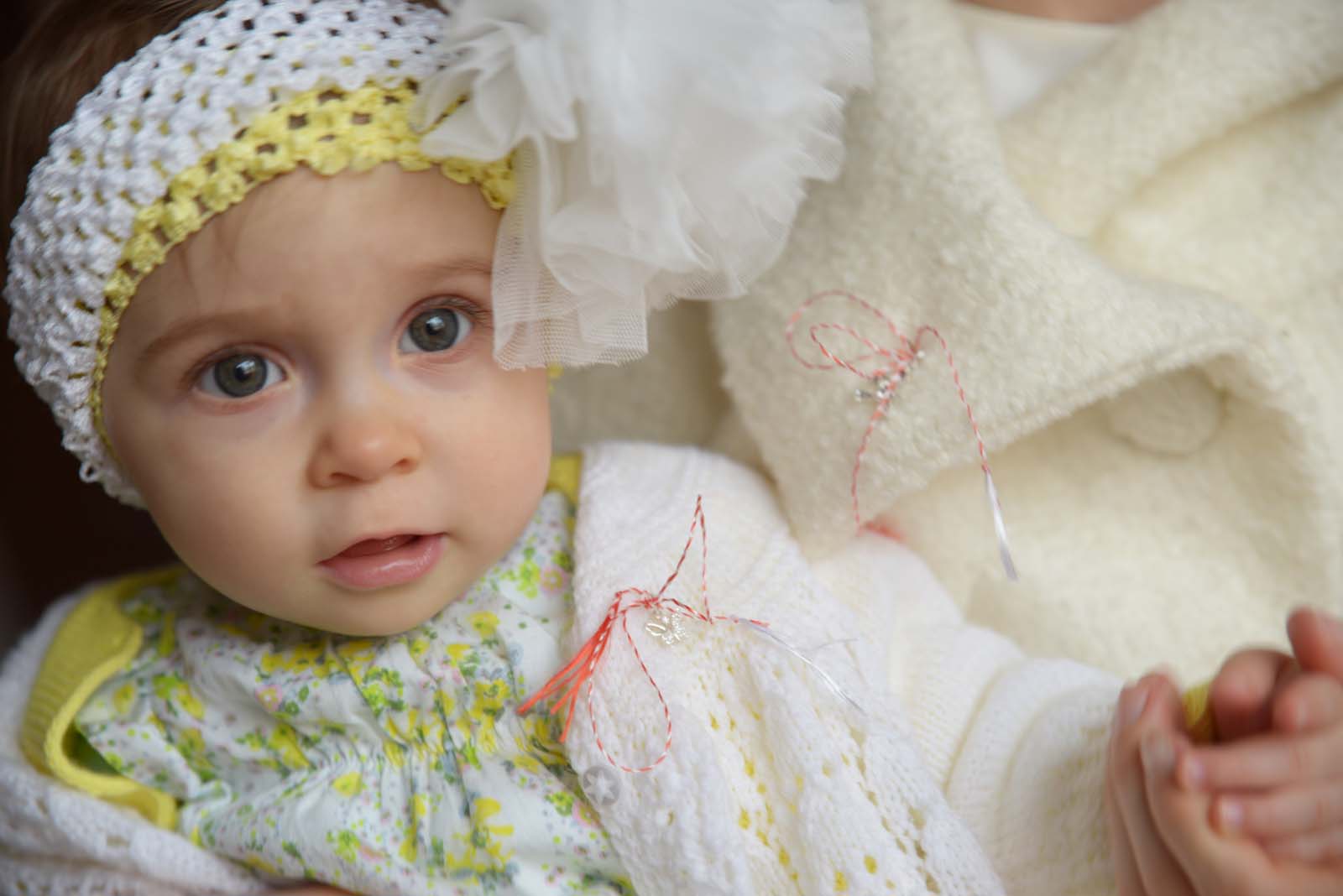